My daughter ran up to me with a plastic zip bag containing a wet snake of a t-shirt, tied with elastic bands and dripping with rainbow colours. She had just attended a tie-dye class at our local library and was beaming at the thought of donning her newly created top.

Stapled to the bag was a clear set of instructions that – if followed – would result in the project retaining its vibrancy. The shirt had been dyed using food colouring, so obeying the directions was essential.

I had no trouble with step one, and left the shirt in bag for eight hours.

Then, I started improvising.

I was supposed to dissolve a LOT of salt in a pan of cold water and let the shirt soak for a while. But, since we didn’t have a lot of salt in the house, the quantity was closer to a pinch than a cup.

What difference could that make? (A lot, as it happens.)

Shortly after, I drained the pot, refilled it with plain cold water, and promptly forgot what I was doing, leaving the shirt to soak overnight.

This was the wrong thing to do.

I awoke the next morning before the rest of the household, quietly switched on the coffee maker and anticipated the enjoyment of a cup of dark roast on the front porch. But before I could add the half and half, I noticed the pot on the counter near the sink and that’s when I saw the nearly white t-shirt floating in the water.

No colour left behind.

I had to think fast, but with no fabric dye in the house and – clearly – no tie dying knowledge, I began to feel desperate.

Then it hit me.

Food stains clothes! I will use food to stain this shirt!

As the coffee in my mug slowly cooled, I scooped up some frozen blueberries and threw them in a pot of water on the stove. Meanwhile, I grabbed a mustard bottle from the fridge and proceeded to squeeze a giant dollop into a bowl of cold water, stirring all the way.

When my daughter emerged from her room, she immediately asked about her shirt because of course she did, but before she could sneak a peek at the fabric which might as well have been soaked in bleach, I enthusiastically sent her outside to gather a handful of grass from the lawn, which I then tossed into a pot of boiling water.

I broke the news to my kid just as the makeshift dyes were ready. Fortunately, she was happy to redo her shirt while working with the following colours. 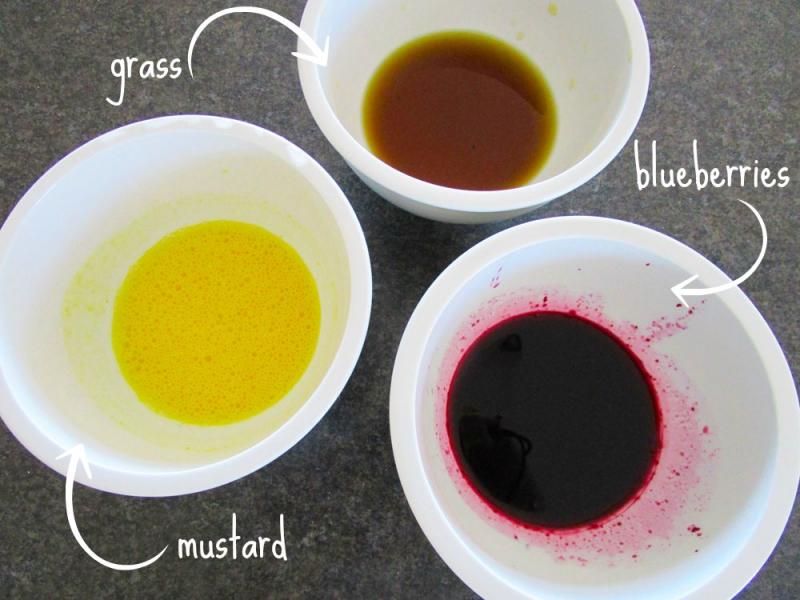 Once I squeezed most of the water out of the shirt, my daughter and I twisted elastics around it, just as she had the day before. 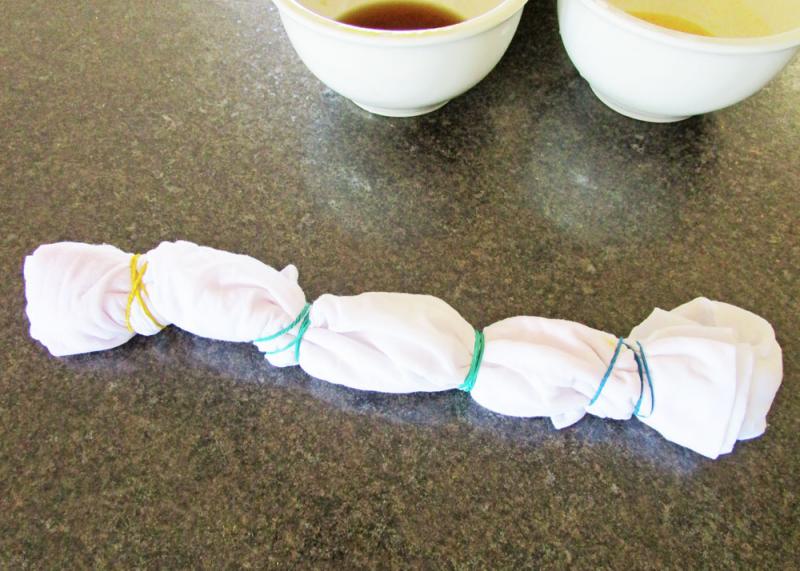 We then moved our operation outside. 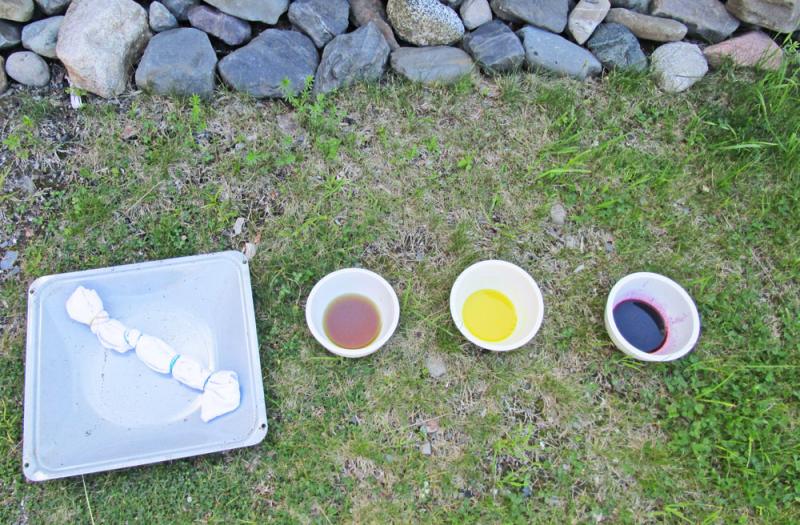 My daughter dipped the fabric into the bowls of colourful liquid.

The mustard was amazingly bright. 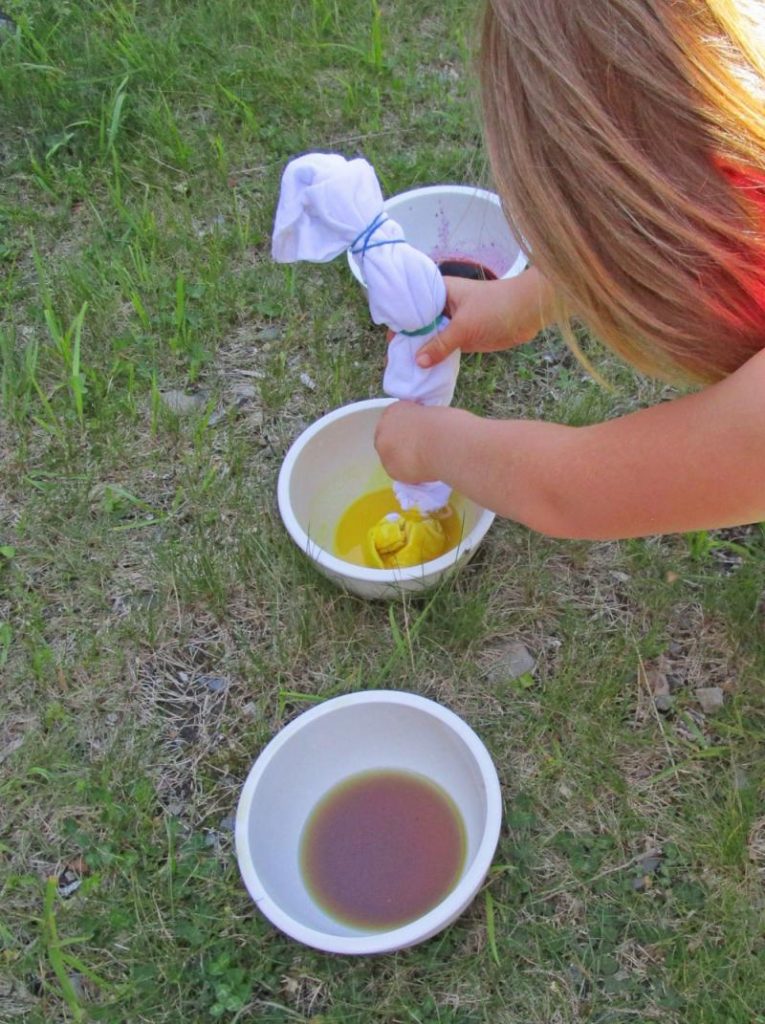 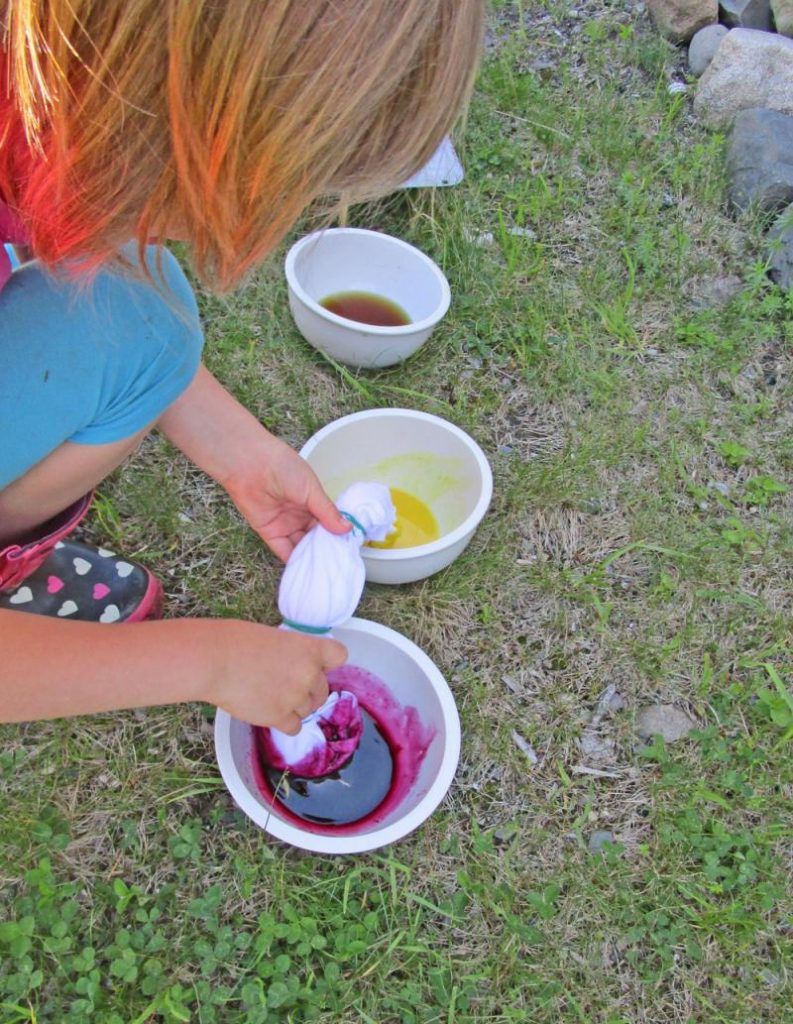 The grass-stained water did nothing. I’m guessing we didn’t use enough grass, or I cut the boiling time too short. It’s impossible to know for sure since I was making it all up as I went along. 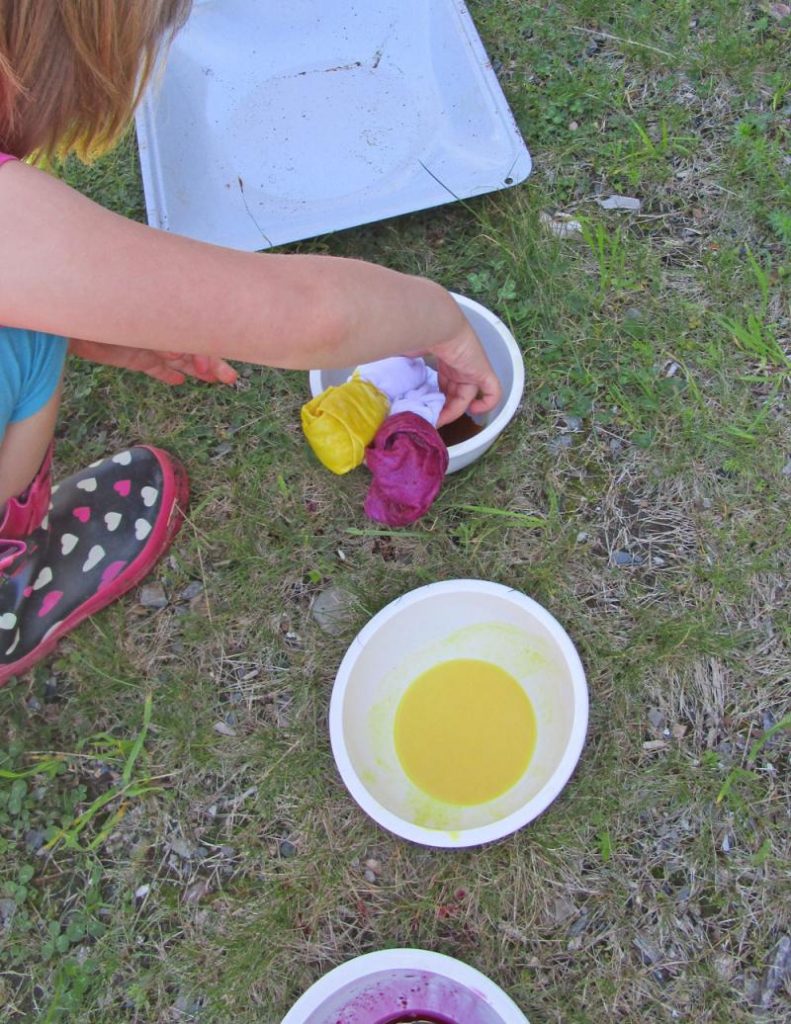 Once my kiddo was happy with the colour patterns, she abandoned her shirt snake and went inside to eat breakfast. 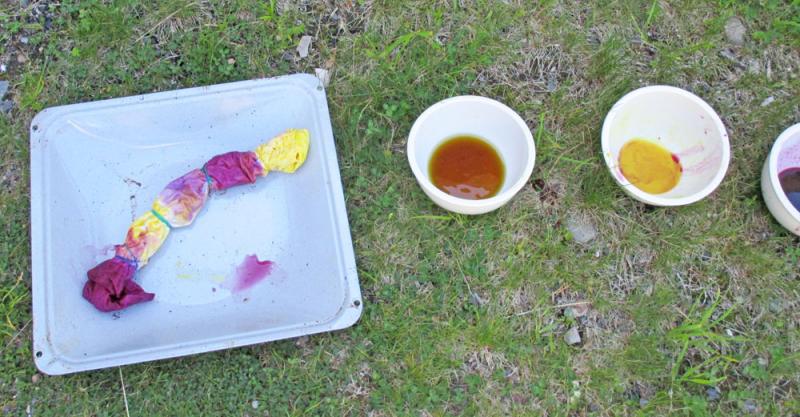 Because the people at the library seemed to know what they were doing, I did as they did and stuffed the newly dyed shirt into a zip close bag. Then, I left it in the warmth of the sun for several hours. 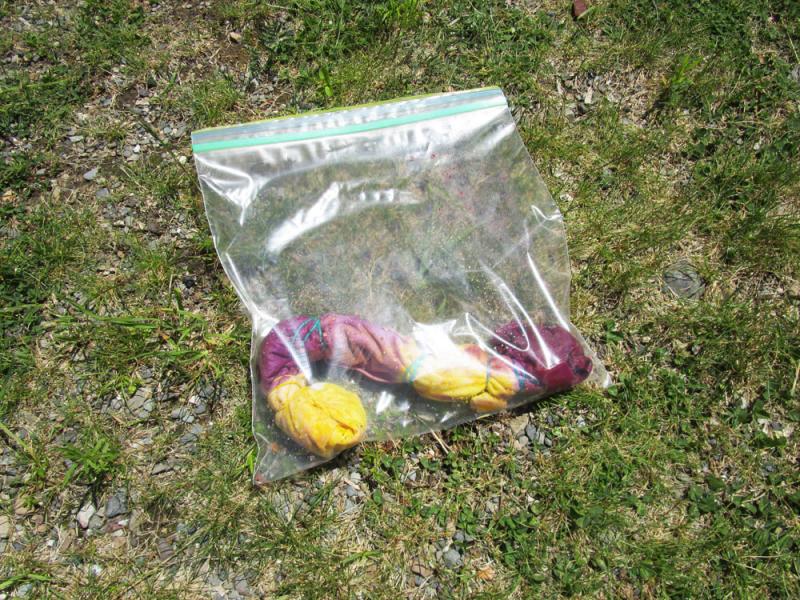 Later, I filled a large pot with cold water and about a cup of vinegar because I knew how important vinegar was when I made all-natural Easter egg dyes. 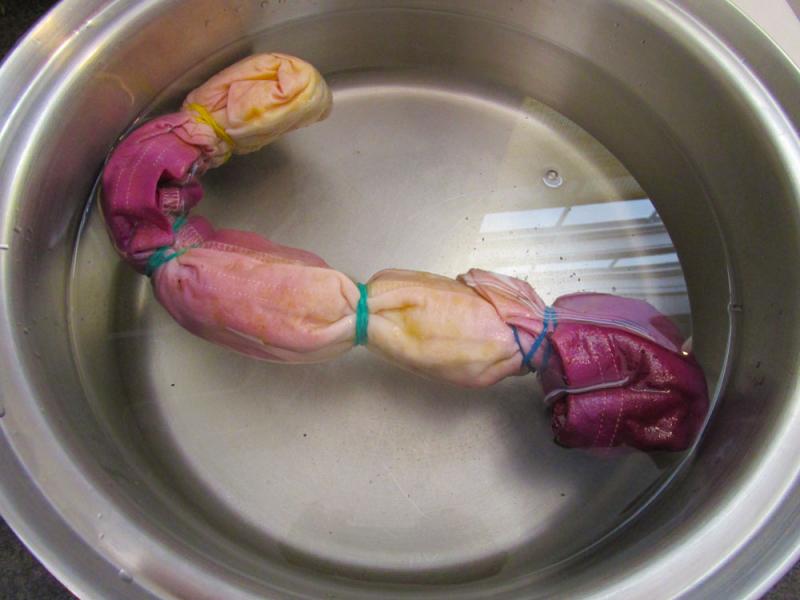 I removed the elastics and left the shirt to soak in the vinegar water for an hour or so. 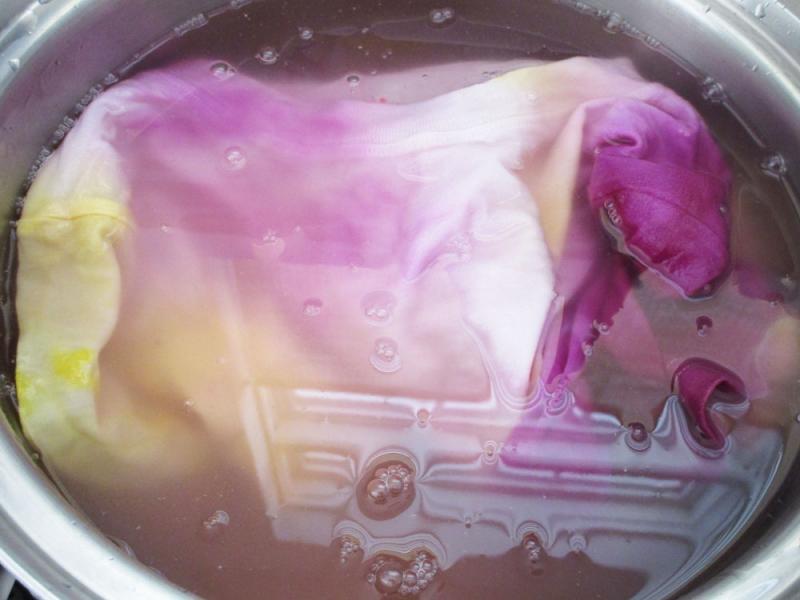 Then, I rinsed the shirt thoroughly and hung it to dry as my daughter squealed with glee beside me. The colours were really dark. Darker than I thought they would be. Also, the blueberry colour changed from red-violet to blue-violet. 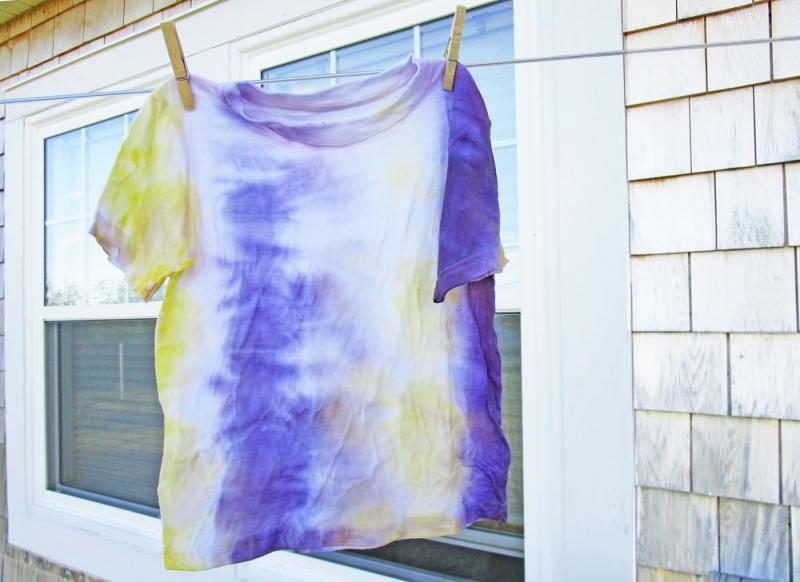 Once dry, the colours faded a bit, but the tie-dyed t-shirt still looked pretty darn cool. 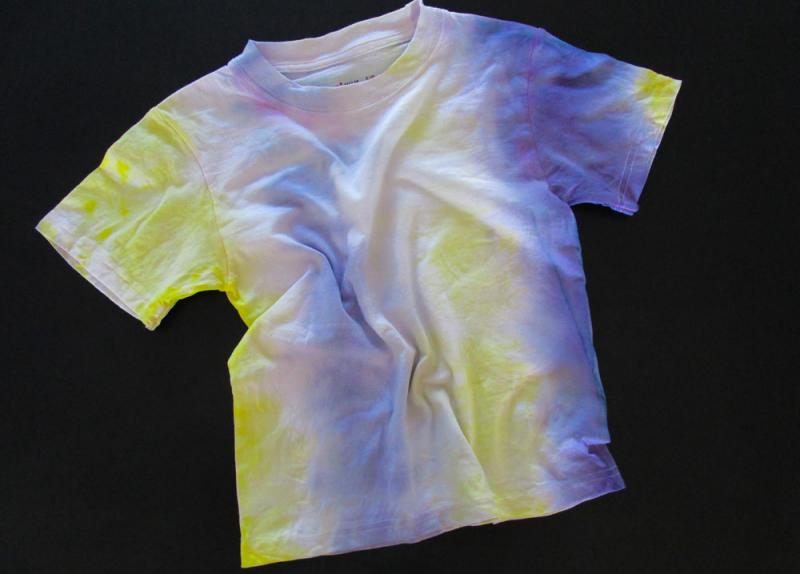 I’ve since washed the shirt once – in cold water – and the colours have stayed relatively true, leading me to believe that my impromptu experiment was a success. Either that or my detergent isn’t particularly effective. However, this technique was so easy and so fun, I figure if the colours fade, we’ll just grab more food out of the fridge and do it all over again.