Students will use scroll shaped pieces of paper and colored pencils to create their own Egyptian Book of the Dead.

By Charlotte Broxon [Charlotte is a teacher at Stone-Robinson E.S. in Charlottesville, VA]

Cognitive: Students will learn about the Book of the Dead and its importance to Ancient Egyptian culture.

Affective: Students will identify with ancient Egyptians through learning about their culture and religion.

Psychomotor: Students will use scroll shaped pieces of paper and colored pencils to create their own Book of the Dead.

The Egyptian Book of the Dead provided instructions for a mythic journey from this world to the afterlife.

Students will create their own Book of the Dead using colored pencils and scroll shaped paper.

Scribe: Person who was in charge of recording events and writing documents in hieroglyphics.

Egyptian Book of the Dead: Written by scribes and illustrated by artists, this series of books was like a map to the Afterlife.

Afterlife: The Egyptians idea of Heaven\Paradise.

Papyrus: Paper made out of reeds in ancient Egypt.

Osiris: God of the Dead.

(Most likely “King Tut” will be mentioned.)

The ancient Egyptian didn’t really fear death that much. Do you know why?

They believed in something called an afterlife, which is an equivalent to the modern day concept of Heaven. They believed that after they passed away, they would go to this afterlife and live happily ever after. The Egyptians believed that the afterlife was just like earth except perfect because it was ruled by Osiris.

Have you heard of Osiris? Osiris was the Egyptian God of the Dead.

But in order to get to the Afterlife, the person who had died had to do something special. Have any ideas?

What the person had to do was find his own way to the afterlife. While doing this, he had to do things to please certain gods he met along the way and navigate sacred rivers. One of the most important things he had to do was have his heart weighed against the feather of Matt (Truth) by Thoth, the god of truth. If the feather and the person’s heart were equal in weight, the person could proceed to the next obstacle in his journey. Basically, the person had to overcome a series of obstacles, like an obstacle course, to make it to the Afterlife.

Here is where the Book of the Dead comes in.

What do you think the Book of the Dead was?

The Book of the Dead was like a guidebook on how to get to the Afterlife. But it wasn’t really a book like we think of a book, it was a really long scroll made out of papyrus.

It was kind of like a map that showed the person which way to go and what to say to the gods he encountered along this obstacle course. Without this book the person might never make it to the Afterlife. So, would you say that this book was important to the Egyptians? And why?

Just like any book, the Book of the Dead had a beginning, middle and end. The difference is that this book started after the person had died.

What we are going to do today is make our own Book of the Dead.

So what we have to do first is pick a main character.

I’m going to throw you a curve ball. You can pick any character you want, anything at all, except a human. What characters do you think you might pick? This character doesn’t even have to be alive. It could be a broken dish trying to battle kitchen appliances to get to super glue. Anything you want. Do you think an example might help? (Show scroll example. Discuss symmetry, etc.)

Our materials today are: Scroll shaped paper, colored pencils, and string. The second thing we have to do, after picking our character, is to figure out what kind of obstacles they will need to overcome. Then we need to figure out how to divide the space, kind of like drawing a comic strip. (Demonstrate this.) Then have the first frame showing your character dead or broken or whatever. After that, you go ahead and illustrate the rest of your character’s journey to the afterlife. Remember the balance and the colors that the Egyptians used when you do this. Then go ahead and add the text. Then, after it’s dry, you can roll it up and tie so it looks like a scroll.

A Few Rules Are:

(Repeat Retention assessment questions.)
Now, I’d like you to tell me a little bit about the characters you chose and what they have to do to get to the Afterlife. (3 or 4 students will share their ideas.)

Book of the Dead
The Papyrus of Ani. Translated by E.A. Wallis Budge

Virtual Egypt
Book of the Dead. 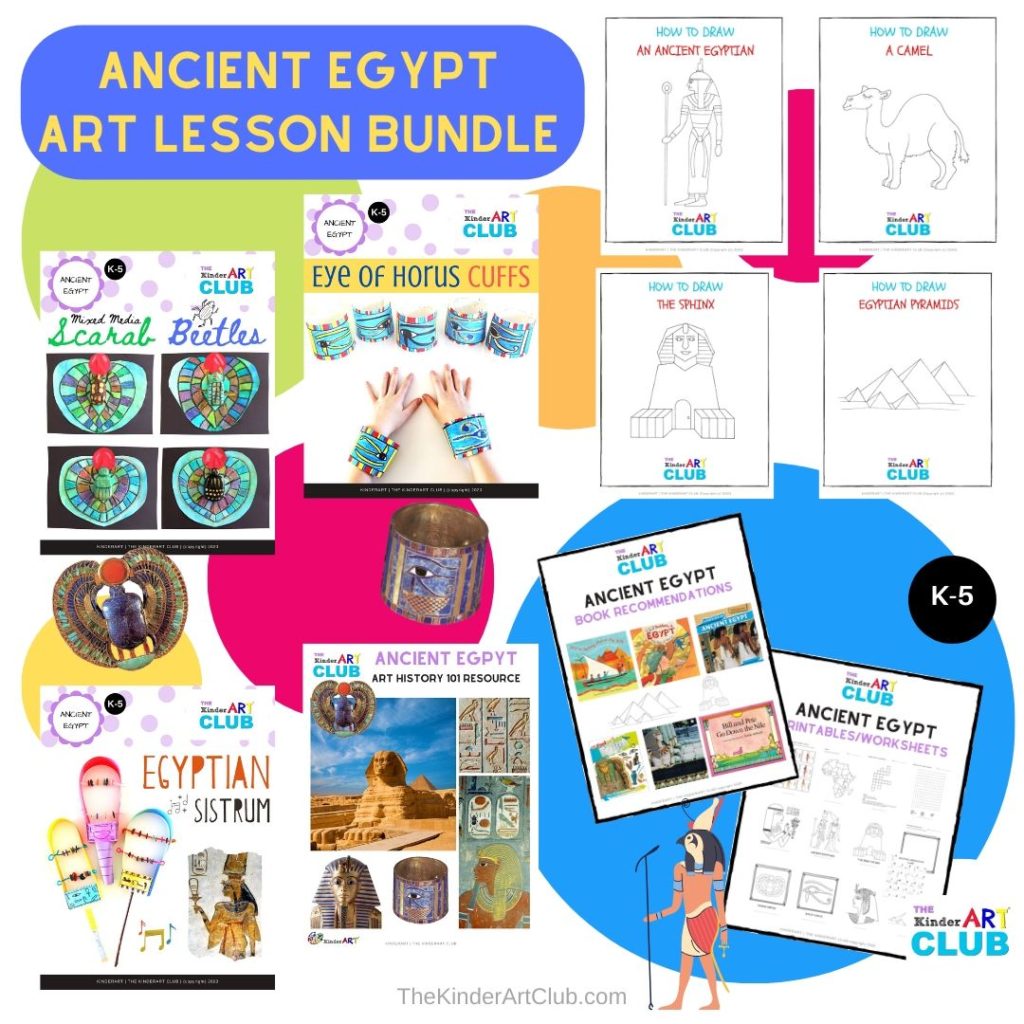 Join The KinderArt Club for detailed step-by-step lessons and resources to help you teach your students and children about Ancient Egypt.