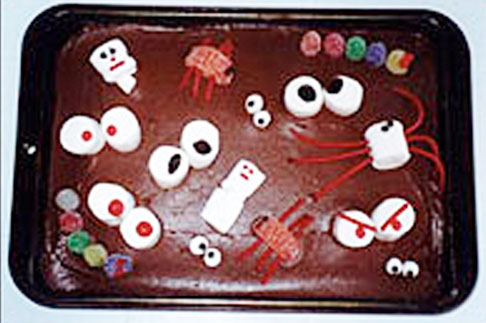 You don’t have to be a master chef to create a fun and festive Halloween cake that your kids will love. Try this easy recipe for success!

Prepare cake as package directs. While cake is baking, prepare frosting and decorations (below).

Cream butter and vanilla in a small bowl with mixer and medium-low speed. Mix until completely creamed together. Alternating, add cocoa and confectioner’s sugar, beating at medium speed until creamy. Add some of the milk with the remaining sugar and cocoa until you reach desired consistency. You will use all the cocoa and sugar, but may not use all the milk, depending on your desired consistency. Set aside.

When cake is completely cooled, pour the frosting on top and spread evenly. Carefully place your critter decorations (below) on top of the frosting and press down gently to set. Get ready for some happy faces!

The key here is to use your imagination. We have given you a few examples, but create whatever critters you like!

Using 5 gumdrops and two cinnamon hots per worm, line up the gumdrops, one in front of the other. Use a toothpick to create indentations in the leading gumdrop. Insert cinnamon hots for eyes.

Place two large marshmallows next to each other, on end. Place a cinnamon hot in the center of each marshmallow for eyeball. Using two 2-inch long licorice vines, create angry eyebrows over the cinnamon hots.

Using a toothpick, poke three holes completely through the sides of an orange jellied candy. Insert licorice vines for legs, poking through the other side and pulling them through. Use toothpick to create small holes in “head” and insert two miniature chocolate chips as eyes.

Place large marshmallow on it’s side. Use a toothpicks to poke three holes on each side of marshmallow to insert legs. Use licorice vines for legs, gently press into the holes. Use two miniature chocolate chips for eyes.

Using a pair of kitchen shears, cut a large marshmallow in half lengthwise. Cut triangular slits out of sides to create jawbone effect. Use toothpick to insert holes for eyes, use miniature chocolate chips. Cut a small piece off of a licorice vine for straight mouth, and a tiny piece for nose. Use a miniature marshmallow for the neck.

MUMMY IN A COFFIN